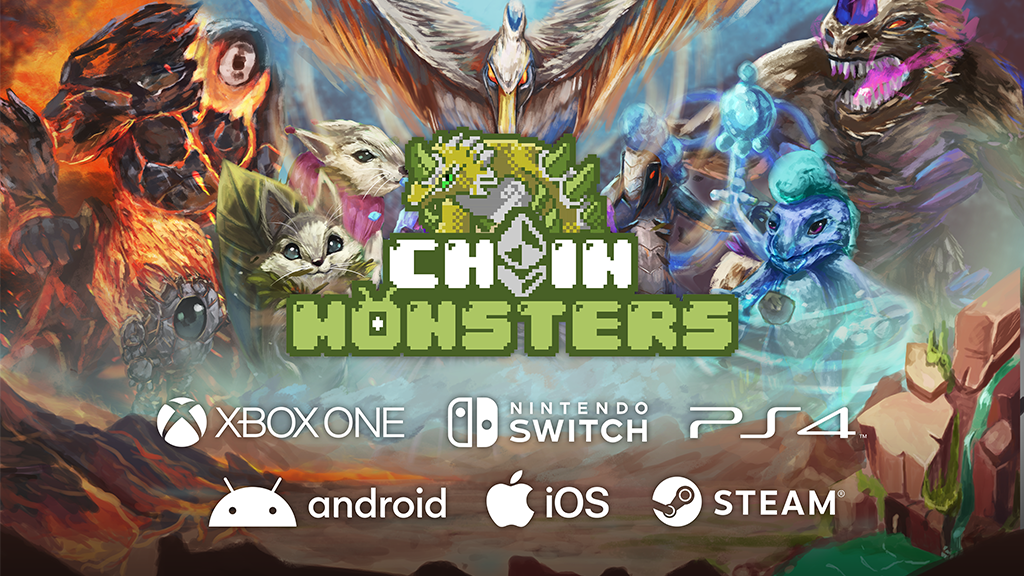 Chainmonsters makes some huge changes in the way mons are trained. Back to Free to Play!

From now on all updates and news will be published here and here first. More on the reason why in this article: https://bsidegames.com/b-side-games/2020/04/b-side-games-utilizing-ghost-io/

The initial plan was to launch the Kickstarter campaign back in January. But there were a few things holding us and especially me (Max) back at that time.

Long story short: The game was not ready yet for the critical eyes of the overall public in my opinion and I was worried that it would not fulfull my own expectations. There needed to be changes in the way the game works and plays.

All of you who have been following the development over the last 3 years are aware that the game went through several iterations - which is very common in gamedev in general but usually does not happen right in the public with multiple public tests and the amount of transparency been given to the players.

From what I have seen everyone agrees that the game itself got better and better with every iteration and that our team's efforts were not going into the wrong direction ;)

Well - there are a few KEY CHANGES happening I'd like to tak to you guys today.

Pixel Art does not mean outdated graphics - to us it means working with certain restrictions that boost our creativity and embrace a very special sometimes nostalgic art style.

We are aiming for a so-called "High-Bit" pixel art style that looks stunning on HD and screens beyond without losing the nostalgic magic of retro games.

One part that makes a big difference is animations!

As part of our redesign we felt that it was time to bring our static pixel art to life!

All Chainmons will have several unique animations that emphasize specific features and/or abilities. Additionally the battlegrounds do have very special extras and effects that react based on abilities casted and/or battle specific events... This will be showcased in the next blog ;)

One of the core mechanic in the game evolves around optimizing your Squad of Chainmons using the best base, IV and EV stats possible.

Each mon had their own very specific base stats and other stats were either randomly generated on catch or improved by items and other modifiers.

We felt that this mechanic might be a bit outdated as we want to reduce the initial(!) amount of grind required to get that perfectly statted Chainmon. Yes we are aware that there are quite a bit of enthusiasts in our community who love to grind and find that perfect Chainmon but don't worry, we got you!

Base Stats are gone!

Yes you read that correctly! One thing that has always been a problem with monster catching games is that in the end when someone wants to play competetively it always comes down to like 10-15 monsters that everyone uses.  The remaining hundred ones are left out and don't see as much love.

We want to change that. Instead of limiting the competetive pool to just a bunch of Chainmons, we want to enable everyone to create the exact squad and teams they want using their favourite mons!

For that reason base stats are no longer in the game and instead every Chainmon uses the same base values for our internal calculations.

Instead, we want to introduce Traits and Loyalty into the game!

Oh and IVs or Individual Values still exist and are determined when a wild Chainmon is caught.

A trait is basically a modifier that a mon has that influnces a ton of different things!

Each Chainmon starts with one trait that is given on birth or exists already in the wild; a second one is either taught, mutated or applied through various ways...

A monster's strength is therefore determined by the following stats:

The longer a Chainmon stays with the same trainer, the more loyal it becomes.

Think of it as a big bond between a trainer and their team - mons are more likely to succeed luck-based abilities and actions for example because their trust into You is so huge.

We are at very early stages of this mechanic but ultimately we want everyone to create their personal avatar in the game so right now we are doing prototypes and will post updates on the progress soon too!

The game has always been designed around Free to Play and our mission to bring a premium F2P experience to the players. We do not want to stop people from joining this game and our community by being blocked by a $15 or $20 price mark before they can even get their hands onto their very own starter.

There happened to be quite a bit of young people and even families playing the previous public game tests and enjoying their time in this world.

For that reason we are making Chainmonsters completely free to play and have instead moved our monetization strategy to a season pass based model which we will utilize to make the whole game available to all players. The season passes will include first and foremost special customization options for your character, house and Chainmons amongst other things.

We are currently looking at an upcoming blockchain and will release a separate announcement post in the next few weeks outlining our decision to move on and when to expect things to happen. (This time sooner than later for real!)

Part of our decision to change and redesign some game elements is because we did not want our advances in the blockchain world to negatively affect the base players. We are confident to have found a solution that will fit naturally into the game and won't be considered Pay-to-Win in any way!

(Maybe you can already guess our direction - TOKENIZE ALL THE THINGS)

As our studio B-Side Games is currently signing a deal with a huge US based partner, we are hiring a ton of new people to work with us and make our games bigger and better!

If you happen to be interested in working with us, checkout our Careeers section!

Hope everyone is doing OK in these weird times and we'll see you in the next blog!